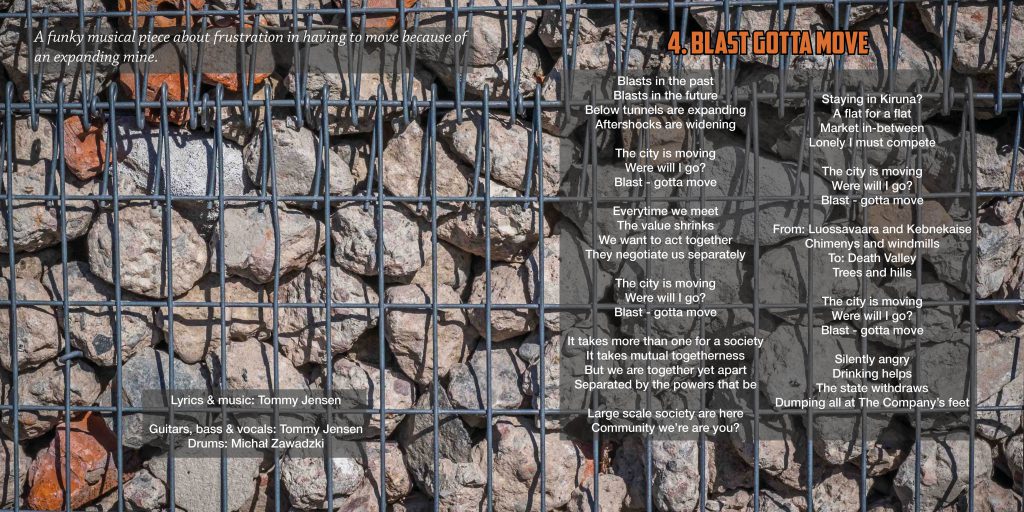 Storyteller #11 is a local person, working for a contractor to LKAB and the Kiruna mine. This story is about having to move because of the expansion of the mine. The conversation takes place at a local restaurant.

– Because we live in this area that will be teared down. All these houses are affected.

[detailing where exactly this area is]

– How do you think about this?

– Well, for us (family with young kids), privately, it feels tough to move, given the situation that there’s nowhere to move. The prices have gone through the roof and it’s difficult to find a house, and it’s not easy, it’s quite complicated. But at the same time you have to understand that we live in a mining town and it has to do with the jobs. It’s influencing several years before it’s time to move.

– Have you received, how are the kids affected?

– The kids say that ‘daddy, do we have to tear down the house and move?’. That’s not so fun to hear. Their history is to live here so they don’t see living here as positive (knowing that they have to move), but they don’t see the bigger picture, they don’t have this view that it’s about the survival of the city.

[talk about the kids]

– We’ve received, we went to a meeting and then we got the information that in 2020 they (LKAB) wants to own the property. But now they’ve looked again at the deformation zones and it seems as if it (the move) will be postponed again, so we might be able to stay some more years before they want to own it.

– How does that influence, ‘should we put up new wallpapers?’?

– Yes, it’s about that. We’ve renovated ever since we moved in because it was pretty run downed, so we shaped it up, but there’s still the kitchen to go. But now, I’ve lost the motivation completely, the organization is under ground. When you talk to the neighbours you feel that they’ve also lost the motivation to do something. The fact that you don’t know influences this (the motivation), and we’re looking at alternatives, to maybe move out of town. We’ve thought about that since it’s so difficult to find a house you’d like to live in. And many are thinking like this, it’s not just we who think about moving.