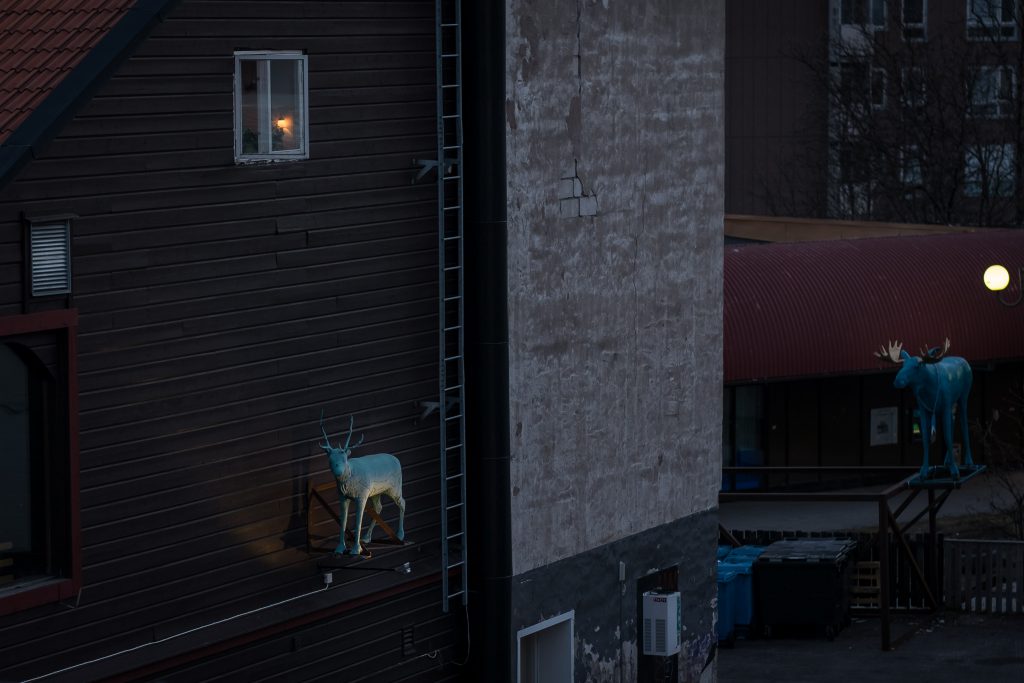 What is so obvious in the labor process in the uranium mine in Saskatchewan – the integration of indigenous people – is less so in the Kiruna case. Of course, that doesn’t mean that the Sami people in and around Kiruna aren’t drawn into and affected by the labour process in the Kiruna mine. We think of the picture heading this post, the LKAB moose and the reindeer, and the relation in-between.

An empirical blindspot in our Swedish case study so far is that we haven’t approached representatives of the Sami people. It’s something that we planned, and initially has started, but not yet really executed. One reason for this is that they are not explicitly drawn into the labor process by LKAB or the unions (they’re there, but not addressed). One reason for this implicitness is that the Sami people don’t have to be addressed as a people with rights to their land by LKAB or any other mining company as these rights do not exist. The Sami people stand in a very weak power position. Times might be a changing, however, given the Girjas’ case and the Kallak case (not cases tied to the Kiruna mine).

During the last weeks, we’ve started a movement from the outside-in, in which we’ve had the chance and privilege to speak to two leading Sami representatives. It’s rather obvious, we should have done this earlier. Why? It provides a very different perspective on the mine, work, power, nature, consumption, society etc. From our reading of, for example, post colonial theory and anthropology and from our initial encounters with Sami people indicate that the Swedish context does not stand out in terms of indigenous people – there are different ontologies about development, colonial history and the relation between humans and nature, and with regards to financial and legal power asymmetries. The two last aspects – financial and legal power asymmetries – are rather surprising, however. We’ve read case studies about mining in so-called failed states and developing countries, and we have our own comparative study in a very comparable society, Canada. What strikes us is that the legal rights for indigenous people in many cases are much stronger than in Sweden (and there are often contractual arrangements providing economic compensation to them), rights that also provide a platform from which a resistance can be built (but it is also a source for internal conflict among indigenous people). A bit paradoxical perhaps, countries with weak institutions also seem to provide a context in which resistance from indigenous people can grow much more explicit.

In Sweden, indigenous people live with strong state institutions, weak legal rights and financial shortages. We’re not saying that the Sami people are facing worse conditions than indigenous people in failed states and developing countries, not at all; we merely claim that the Sami people, embedded as they are in a highly secular, modern and rich country face real obstacles when trying to claim what they (and many others) see as their rights.

But, conceptual thinking and academic reasoning are not enough; it might be a good start, but it remains for us to meet more Sami people drawn into the Kiruna mine, and to listen, to try to better understand.