Load up north is an annual fair. What makes it a bit unique, the organizer states, is that the fair also targets recruitment, not only the exhibition of machines and tools.

We’re in Boden, Johan’s hometown, so he stops by the fair on August 27 and 28. He meets with a supplier we know very well by now, listens to keynotes arranged by Boden municipality, such as the ones by Peter Erkki and Tage Lundin from LKAB, Anders Sundström (chairman of the board for Swedbank and Kooperativa Förbundet), Inger Edlund Pedersen from Norrbotten Chamber of Commerce, Hans Wahlqvist from Mobilaris (providing solutions for how to track people and vehicles in the mine), and Johan Torgerstad from PON CAT (as in Caterpillar).

The mining industry is the perhaps most salient industry during the fair, at least when judging from the equipment exhibited and how the ‘talk of the fair’ goes. Overall, there’s optimism regarding the future of the mining industry in the county, although the iron ore price is low and will most likely remain on this level for a while. This is how a company such as LKAB motivates the need to lower the cost for each tonne of iron ore. Peter Erkki talks about investments in the logistic chain to accomodate more large-scale transports by rail and boat. Head of purchasing, Tage Lundin, talks about the re-negotiating of contracts with suppliers and the establishment of a new supplier manual, all in the context of the need to cut costs for LKAB. Ears are tense in the audience.

On recruitment, there are several private staffing agencies as well as a local high school present at the fair (the keynote by Torgerstad addresses PON CAT’s cooperation with the high school), profiling how their operations addresses skills needed in the mining industry (the most common skill has to do with driving large vehicles). One of the largest suppliers to LKAB is BDX and this company even shares a showcase with the staffing agency Adecco in the indoor section of the fair. It becomes clear that these agencies are important to our project, seemingly playing an important part in the labor process in the Kiruna mine.

The perhaps most surprising showcase at the fair is the one shared by the public libraries in the county of Norrbotten. In the fair magazine, a librarian is quoted saying: “The idea behind having a showcase at a machine fair is to inform and show some of the library’s range in order to arouse interest and promote reading, particularly among men. [—] We hope to inspire more men to become reading role models.” 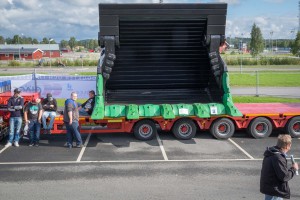 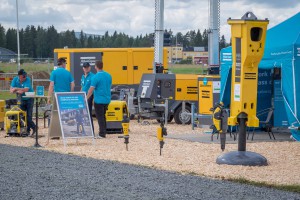