Organizing rocks is a research project about power relations and labour processes in the mining industry. It is based on the idea that something seemingly very stable and territorial – a mine – is becoming much more fluid and deterritorialized than we might expect. This project aims to describe these changes and analyze them in terms of changing power relations in the labour processes. Two cases are in focus, the Kirunavaara iron ore mine in Sweden and the McArthur River uranium mine in Canada (read more further down).

The Kirunavaara mine from Scandic hotel Ferrum.

The project is financed by FORTE, the Swedish Research Council for Health, Working Life and Welfare, and runs between 2015-2017. We who conduct the research and manage this site are Tommy Jensen and Johan Sandström. We are both professors in business studies, Tommy at Stockholm University and Johan at Luleå University of Technology, Sweden. The project is performed in close collaboration with our friends at the International Centre for Northern Governance and Development (ICNGD) at the University of Saskatchewan, Canada. 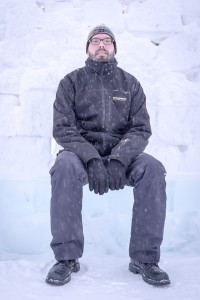 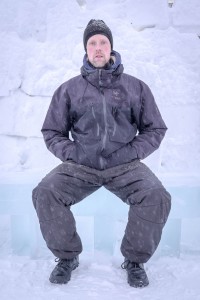 This site was set up at the start of the project and is for everybody interesting in how rocks are organized. We hope it will provide interesting and useful insights, and we also hope that you will take part in developing it, perhaps through commenting and/or spreading its content! Feel free to react to what we publish!

More about the project

Today, there are 16 mines in Sweden, producing more than 70 million tons ore every year. By 2030, the Swedish government estimates that there will be about 50 mines producing well over 120 million tons (Regeringskansliet 2013; SGU 2013; see ICMM for a similar global trend). There are high hopes of economic growth, new jobs and a renaissance of some rural communities. Undoubtedly, mining has had, and will continue to have, a central role in our increasingly resource-intensive civilisation.

There is therefore no surprise that mining as a field of inquiry has a rich past in organization studies (e.g. Henri Fayol, Martin Blumer, Alvin Gouldner, Edward Palmer Thompson, EL Trist & KW Bamforth). Sweden – our home – also has a heritage in this regard, where research predominantly has focused on the worker collective and the labour process in the Swedish mining company LKAB. This present study of mining connects to this heritage, but seeks to extend previous organization studies on mining methodologically in terms of time and space, and conceptually in terms of labour processes and power (empirically, also including the Canadian case).

Contemporary organization studies on mining frame organizing rocks in time and space as still belonging to the past, to the old economy. This means that the production site, where the ore is extracted, is spatially proximate to the labour force and management, and the state is in control of the territory (although ownership and capital is regularly, but not always, treated as international, or even global). The mind-set is still that of a patron and a local industrial community. Few aspects of organizing rocks are allowed at least some degree of geographical ex-territoriality. Targeting social (anthropological) studies on mining in general, Ballard and Banks therefore conclude that: “Residence and land ownership thus emerge as the principal bases for corporate and government identification and recognition of local community membership”, but the “simplicity and neatness of this cadastral form of identity is deceptive, however, precisely because land condenses a host of social relationships for which territory serves as a form of shorthand reference” (2003: 300). Related to the notion of the old economy, contemporary organization studies related to mining are also based on an idea of time that resembles the assumption within financial accounting of companies ‘going concern’, assuming, that is, that a mine will exist for a very long time. This gives rise to a presumed tight connection between mining and regional development (often in terms of employment and economic growth).

These assumptions about time and space are challenged within this project. That is, the starting point for this project is that the rocks might remain the same over the years, but that the organizing of them in time and space does not. Accommodating organizing rocks in the new world of work, the project highlights power relations in labour processes, but in terms of hybridized labour processes and hybridized power relations (where there is a readiness for these processes and relations to cross established spatial and temporal organizational and methodological boundaries). The project can therefore be thought of as a mobile study of power relations in labour processes in an apparently immobile industry. Three questions and related purposes are set forth in the project.

The first research question is: (i) what are the interconnected acts of organizing that make up a modern mine’s labour processes (who are involved, what do they do, who do they interact with, how do they enact or ‘define their situation’)? The related aim is descriptive, to make empirically grounded descriptions of the labour processes of the Kirunavaara iron ore mine (Sweden) and the McArthur River uranium mine in Saskatchewan (Canada). The results from each case can be thought of as detailed action-nets (Czarniawska 2004); nets that are not expected to be confined in time and space; to the territories of Norrbotten and Saskatchewan respectively, and to the traditional stakeholders (workers, management, owners).

The second research question is: (ii) how do these interconnected acts of organizing unravel changing power relations in the labour processes? The related aim is conceptual, to develop understandings of power as not only socially layered (macro to micro) and hierarchical, but also as flat and relational, and as something that are exercised by different actors, situated in different times and spaces, in a wide variety of ways.

The third research question is: (iii) how can the findings from the project help actors involved to better articulate (put into words) their role, situation and possibility to act (discretion) related to the changes in the labour processes? The related research aim is normative; to assist actors involved in developing their discursive consciousness. By this, the earlier Swedish tradition of “industrial democracy” and concerns of democracy in organizations is hopefully revoked and furthered.