Its been a while since we were in Kiruna and although in a writing-up phase, Johan went up there earlier this week, meeting with some of those we’ve talked to over the years (and some new ones!) as well as experiencing first hand how the movement of the city centre due to the expanding mine is progressing.

Most of those whom Johan talks to are frustrated over the fact that the new city centre is dismantled while the new one only consists of a new city hall under construction. They’re anxious of the ‘in-between’ period. They share stories of people moving from Kiruna to the coast. On the other hand, there are also positive forces at play. On the day of Johan’s arrival there is a full day seminar with local people from different sectors that aims at triggering constructive processes and here the stories are more positive, more opportunity oriented. On the day, the annual book fair also has its first out of three evenings with nationally and internationally renowned authors, a very impressive event, drawing full house in the big auditorium in Folkets Hus. Kiruna lives.

The city-scape, however, has really changed in a rather short time. Although Johan, as an outsider, is not supposed to have the emotional ties that so many ‘Kirunaites’ have, it still hits him. The iconic clock tower of the city hall where we had our exhibition has been dismantled (re-located to the new city hall, see picture below, part of it stands on the right side) and this single act has a bigger effect on the landscape than can be anticipated. Not to overstate it, but it’s like removing the Eiffel Tower from Paris, at least. 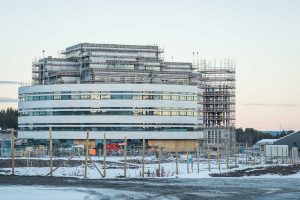 The last of the houses on Ullspiran has been teared down (we’ve been filming the early phases of this processes, posted on the blog) and the Hjalmar Lundbohm house has been re-located (you see the house in its new location at the bottom-left of the picture below). 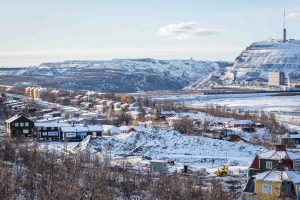 We hope for one more trip to Kiruna before the project ends at New Year.