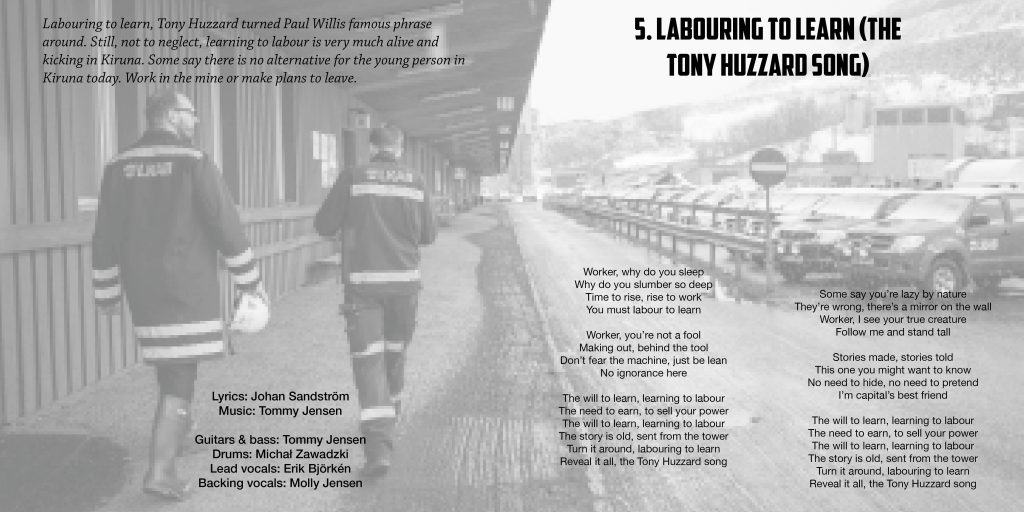 Our storyteller #4 is a man, born and raised in Kiruna, a long-time miner, but who has now left LKAB. Below is a short but rather layered story on work and culture:

– There is a kind of escape tendency at LK(AB), people are curious about trying something new since LK is rather controlled. It’s a big company, there are a lot of meetings, there are unbelievably many protocols, and it shall… There are not many ways to take own decisions and so on, so it can be a bit tiresome to work in such an organization if you want a little more speed and action. But then again, as I use to say, LK is a thousand companies in one.

– Yes, it’s like every work-shift (group) is different from another. Some could be really committed and do a great job whereas the next work-shift could be the opposite. So you could never say that “at LK, it’s like this or that”. And then there are so many different occupations so it’s, LK is very, very broad, if I put it like that, both in terms of commitment and in all other ways. […] I get a little bit irritated with people, back then when I worked at LK, (who said) that “at LK you don’t do anything, you’re just sleeping” and so on. Then I knew how hard I worked. Those I knew worked just as hard too. Then there are also those who do nothing, who really tries to do nothing, puts a lot of energy into doing nothing.