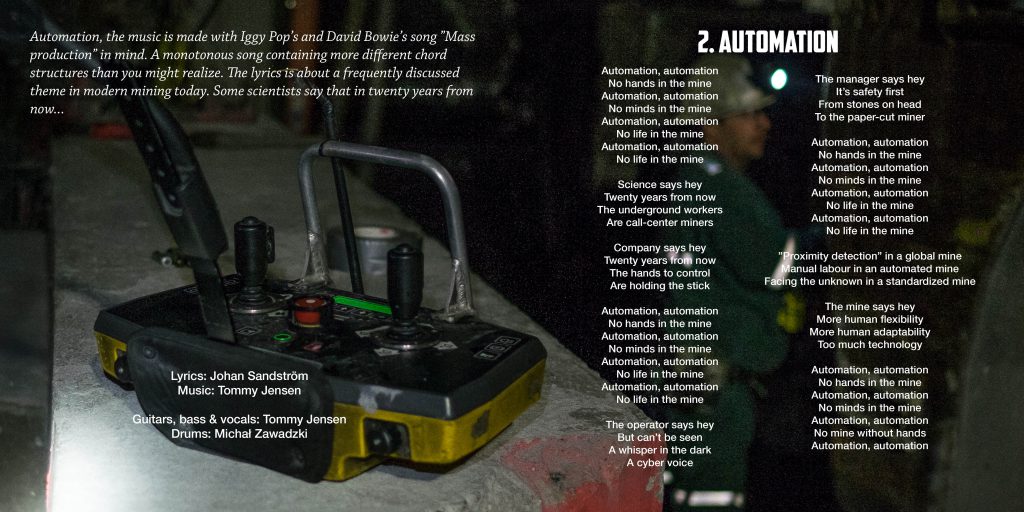 Just recently, top management has expressed itself in positive terms regarding plans for a new level in the Kiruna mine. The latest one, at 1365 meters below ground, has just recently been completed (although in use for some years already). Expected to last for about 15-20 years, it looks as if the Kirunavaara mine will continue to go deeper, although much is still uncertain. We recalled a discussion with a middle manager inside the gates that we had early on in the project, asking if a new main level is probable:

Yes, I think there’ll be a new level, in one way or another. It’s not sure it’ll look like the one on 1365 because 1365 is a luxury build. We got almost everything. Then it depends a bit on the conditions of the mountain down there. But the type of spaces we’ve done at 1365, I doubt that we’ll get them, for mountain mechanical reasons, on 1770 or something. But there might be other… I hope that in about ten years, then you’ll have other technological solutions for how to lift rocks, well, to solve rocks. Whatever those might be.

[we talk about zero-entry mining, no hands in the mine]

Yes, I’ve been involved in that a bit and there are many of these future projects that you: “Well, well, but just as long as he [sic!] doesn’t put up a tight time limit”, then I think we’ll get there soon, but…

[we talk about automation]

But we could have more robots, for sure. And I hope it will happen, partly to save people, not just in numbers but also their physics. We still have some risky jobs… [inaudible] It doesn’t matter if it falls down on a robot or if it gets the stone on top of it. There is no “ouch!”, just pull it out, repair it and then in with it again. So for that sake, I hope for zero entry.