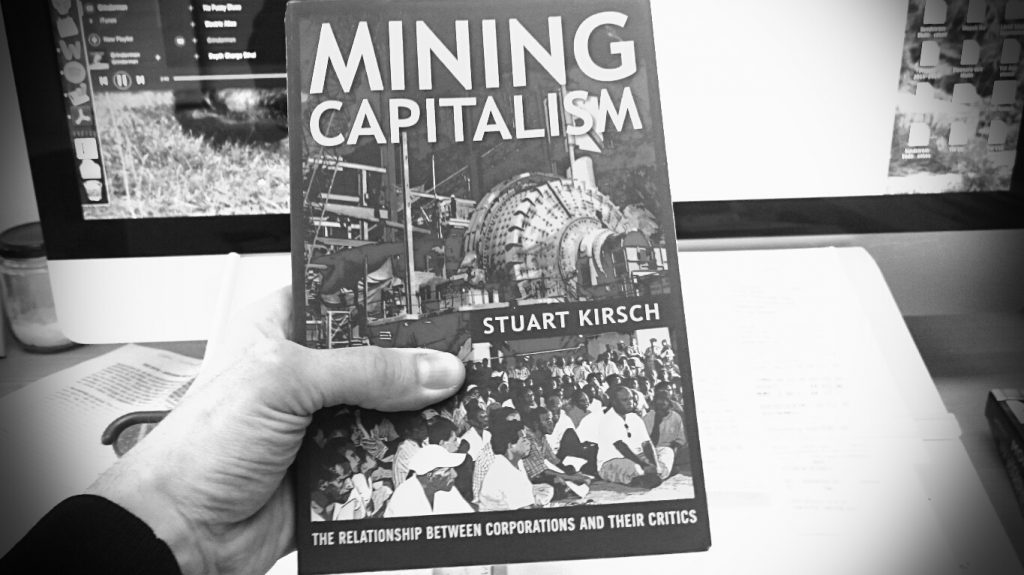 We’re reflecting on the book Mining capitalism (University of California Press, 2014) by Stuart Kirsch, professor of anthropology at the University of Michigan.

We’ve mentioned this book before, but thought we’d dedicate a post on why we see it as relevant and useful to Organizing rocks. First of all, it’s a very encompassing book, targeting the relationship between corporations and their critics, between capitalist modes of production and critics of it, a dialectical relation that “can never be completely resolved; they can only be renegotiated in new forms” (p 3). Kirsch’s main research focus is how corporations “counteract the discourse and strategies of their critics” (p 3), and vice versa, our reading tells us. The book, and the main case in the book, is based on “more than two decades of ethnographic research and participation in the indigenous political movement that challenged the environmental impact of the Ok Tedi copper and gold mine in Papua New Guinea” (p 9).

Kirsch states that as the mining industry traditionally hasn’t been involved in consumer politics (not a consumer product), it rather recently has had to engage in public relations (PR) and communication, where the Ok Tedi case constitutes a pioneering case. It’s now common that mining companies have elaborate strategies for targeting their critics and for their need to achieve or keep a social license to operate mines (the quest for legitimacy).

Kirsch outlines two different strategies, the politics of space and the politics of time. The politics of space is used to deal with how indigenous people and Non-Governmental Organizations (NGOs) organize in “transnational action networks” (p 2) and how this enables them to “replicate the geographic distribution of capital by putting pressure on the corporation wherever it operates” (p 3; p 53). Global, boundary-crossing corporations (and their use of the politics of space) are today matched by global, boundary-crossing NGOs. The politics of time is used to deal with “the means by which elites extend their power over the body politic through their control over the social construction of time” (p 191). We think particularly of the sunk costs and inertia permeating mining projects. Once started, they are usually very difficult to challenge; talk about a rock solid path dependency! Or? It’s of course not carved in stone, solids (usually) leak and risk becoming something else (e.g. a mine turns into an environmental problem in the presence and future, a mine turns into a turist attraction, etc.). This makes Kirsch conclude that focusing on the time before a mine is opened is a more hopeful strategy when aiming to prevent environmental harm. This is also a debate that has emerged in Sweden rather recently.

Kirsch’s chapter on “Corporate science” speaks very well to our project. It compares the tobacco, petroleum, pharmaceutical and mining industries in their approach to scientific research. In order to handle corporate critics, PR alone doesn’t seem to get the job done. Corporations also need to enroll science in their quest for legitimacy and continued exploration. Kirsch finds strong similarities among the industries in how they increasingly permeate the directions and contents of university research, enhancing the risk of uncritical science and co-opted scientists. Kirsch even argues that this might be intrinsic to contemporary capitalism. Among the examples he cites to support his analysis, we can also add the International Centre for Corporate Social Responsibility at Nottingham University, UK, being launched with 3,8 million British pounds from the tobacco industry (click here, and see bottom of page 2). This is also an example of how industry increasingly has taken over the promotion of the CSR discourse from their critics, ending up with a weak version of sustainability, at best, often filled with oxymoron’s such as ‘clean coal’ (mentioned by Kirsch) and ‘green pellets’ (iron ore, as in our study).

A highly relevant aspect in Kirsch’s book, for Organizing rocks, is the focus on different power asymmetries. Indigenous people and NGOs are usually not in a position to offer 3,8 million British pounds to ‘independent’ researchers and institutions, or mount an impressive staff of litigators to manage a legal conflict on mining. These are not only asymmetries in financial and legal muscles, but perhaps more importantly in knowledge and in which discourses conflicts are supposedly decided. For example, for indigenous people to use their own discourse on the environment in conflicts with mining corporations runs smack into the rational, scientific discourse and the judicial discourse inherent in court rooms. On power and knowledge, asymmetries on the environmental, social and economic consequences of mining are what seem to motivate Kirsch’s engagement in the Ok Tedi case, working more on the side of the locals, of those affected. Which information did the locals get, which did they not get, and how could they interpret and make sense of it? We see similar asymmetries in the Swedish case, where, for example, neither the municipality of Kiruna or the Sami villages have an expert in geology and is therefore in the hands of the information the mining company, LKAB, gives.

Hovering over the conflicts between corporations and their critics is the role of the state(s), and it’s a complex and complicated ‘body’. The state often have multiple roles as a shareholder/owner, a regulator (also in our Swedish case) and as geopolitically accountable for securing equal opportunities and conditions throughout ‘the whole state territory’. Mining companies also come with promises of economic growth, promises difficult for states to neglect, it seems. Kirsch states that: “the state can be described as riding on the backs of the elephants, on which it depends to run the country (Kirsch 1996). The interests and appetites of the elephants may be placed ahead of the needs of citizens, who only contribute a small share of the country’s budget.” (p 32) With the state actively promoting mining, might also place a wet blanket over other initiatives to develop the particular region, resulting in that “the other sectors of the economy continue to be neglected” (p 33).

Much has been said about the eroding of the state (from the argument that it is a serious problem to that it is simply a wrong assumption), but it is hard to deny the complexities globalization (cf. Jensen & Sandström 2011*) brings with it and its pressure on (the very recent innovation) of the nation state, its governments and state apparatus.

What about the future of so-called more responsible mining, then? Kirsch states that: “More than two decades of research and practical experience in seeking reforms tempers my optimism” (p 221). The responsible mine, according to Kirsch, is like a mythical beast that people have heard about but not seen. Concluding the book, he states that: “The goal of political organizing on these issues is not to stop all new mining permanently but rather to compel the industry to improve its practices by raising international standards; to ensure that these standards are obligatory rather than just voluntary; and to establish fair, effective, and transparent mechanisms for complaint resolution, coupled with the swift application of strong sanctions to ensure compliance.” (p 221)

Reading Kirsch’s book, we also come to think of how most studies on globalization, capitalism, mining and corporations, tend to focus on tensions between a colonizing West/North and a colonized East/South, on a Western mining company in a developing nation (as in Kirsch 2014, Rajak 2014, Welker 2015; Alex Golub, Leviathans at the gold mine, 2014, x-x1, decides on the concept of “Euro-christian”), whereas we try to stay with the enactment of similar processes but in affluent settings, in well-developed nations (Canada and Sweden), and remote areas therein (Saskatchewan and Norrbotten). There are, we notice, similarities between affluent countries and countries that are hard to pin down as ‘states’ (weak states, failed states), but in our study we see emerging and somewhat unique vulnerabilities in so-called developed regions (or Euro-christian). We also argue that labor processes have been neglected in contemporary research. As Kirsch states: “Although labor conflict in the mining industry has not disappeared, its political significance has been greatly diminished” (p 5), based on the argument that worker collectives and unions are weakened and where more neoliberal ideas increasingly permeate the industry. But, we believe, therein lies an important reason to once again focus on labor and power.

These are some of our reflections from Kirsch’s book, but we promise, there are plenty more (on audit culture, freedom and money, the resource curse etc.). It’s a very rich and thought-provoking book.