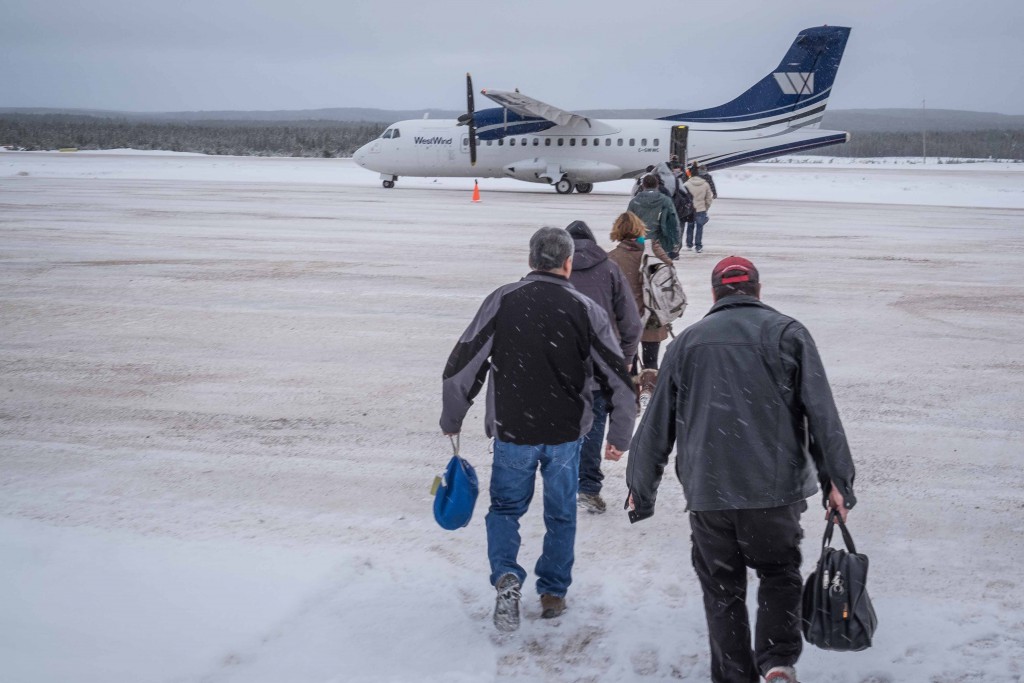 Work at the McArthur River uranium mine (and at all other Cameco mines in northern Saskatchewan) is predominantly divided into two shifts, one day and one night shift. 12 hours of work per day, lunch included.

The absolute majority of workers do seven days on site, then seven days off (7/7). Top management on site, however, works Monday to Thursday and then Friday to Sunday off. Some of the workers are offered two weeks in, two weeks out, but this seemed more common among contractors and for workers living outside Saskatchewan.

During the four days I spent on site, I was interested in how people experienced this system as we know that it exist to some extent in Kiruna and that there is a general, global trend in the mining industry to organize labour this way. Before arriving at MCA, I had also read the reports published on the Community Vitality Monitoring Partnership Process website on the effects of fly-in/fly-out (FIFO) work, workers’ health and on socio-economic matters related to northern Saskatchewan, but I’ll not touch on these in this blogpost. Here I focus on the several workers I got to speak to on site.

They obviously spend a lot of time away from their families and local communities, and life on site is very special given that they eat, sleep, work and play inside the gates so to speak (there will be a Goffmanian analysis of this in the future). Overall, people seemed very satisfied with the system. I cannot recall anyone that I talked to being overall dissatisfied. Not surprisingly perhaps given that they didn’t know so much about who I am and why I’m asking (beyond my two-minutes introduction). Their argument, however, was usually that the fly-in/fly-out (FIFO) life enabled them to stay in their communities (they didn’t have to move to get work, Cameco picked them up) and they got to spend quality time with their families or enjoying their favorite leisure time activities the week they spent at home.

A very positive aspect mentioned was also that life on site was so intense that many grew friendships for life. A “second family” or a “family away from home” were very, very common expressions. Many gave examples such as inviting all who they work with to their wedding or spending a lot of off-work time together. I guess this is not so surprising given that you cannot really hide on site and get to know both good and bad sides in each other. You get very close to each other. I will write more about this later on (to some extent this also taps into some stories from Kiruna on the strong social and emotional ties created between workers underground, as in the post “What is said underground stays…” from August 28). It fascinated me because this observation is a contrast to what seems to be a general idea about how organizational solutions such as FIFO-life fragmentize social relations and triggers further individualization. These people tell of social relations going deeper than ‘normal’ work relations. Then again, fragmentation might still be an effect, but one that is dispersed from the workplace to the communities. More on this later on.

For sure, there were negatives with FIFO-life. In the conversations many rather bluntly stated that: “I’ll miss half of my kids’ lives”, but once home, they could go all in, when the kids left for school and when they came home. Skype, Facetime etc., also helped reduce the distance. They also said that it was difficult to be engaged in community life (ex. sports teams, charity work and other things that demanded a more continuous presence back home) and more or less all addressed the extra burden placed on their partner (predominantly a wife, whose perspective would shed important light on FIFO-life; we’ve just got to know of the interesting research in this area conducted by Robyn Mayes and colleagues – to be explored!). Most mentioned the extra help they get from neighbors and friends back home when they’re on site with things like shoveling snow in the Wintertime. In different ways, FIFO-life extends into the community back home, that is.

The most frustrating thing about FIFO-life according to several workers, however, was the fact that they were a flight away from home. If anything would happen, they couldn’t just hop in the car, on the bus or the bike and go home. They were to some extent stuck on site. The perception of Cameco was in general good in terms of arranging a flight out should there be an emergency.

Coming back to Saskatoon, I interviewed a couple of workers at a contractor spending a lot of time on site at MCA and I confronted them with my impression of everybody being overall satisfied with the fly-in/fly-out (FIFO) life. They basically said that its right, but that it might be explained by that people not able to cope with FIFO and camp life often find this out rather quickly and quit. Sure, they knew of a couple of guys that keep working although they really don’t like the set-up. They usually go to their room after dinner, don’t socialize. It’s not good for work environment, not preferable, but it’s their choice, the workers I talk to argue.

I did meet some workers traveling a long way to get to one of the pick-up spots for the Camecoflights. One came all the way from Nova Scotia (about 5000 km from MCA). Needless to say, although he liked his work and his colleagues at MCA, he would prefer a job closer to home. Although his colleagues joked about how they took care of him (gleam in the eye), facing the long travels to and back from work is not the only burdening aspect; there is also the rather strong provincial patriotism regarding who should get jobs in the mining industry in northern Saskatchewan (I encountered this statement later on: ‘why can’t we hire a guy from Saskatchewan?’).

Writing this, I realize, prompts other blogposts:

How does FIFO and camp life influence worker-management/union-management relations? After all, you’re stuck with each other. Frictions at work follow you to dinner and when playing cards.

How does the provincial patriotism work and how is it played out in practice? More than half the workers at MCA are from northern Saskatchewan and the absolute predominant part of them are aboriginals.

How does the reports published on the Community Vitality Monitoring Partnership Process webiste resonate with my own impressions?

Not the least, which questions do all of this ask to our Kirunacase?!