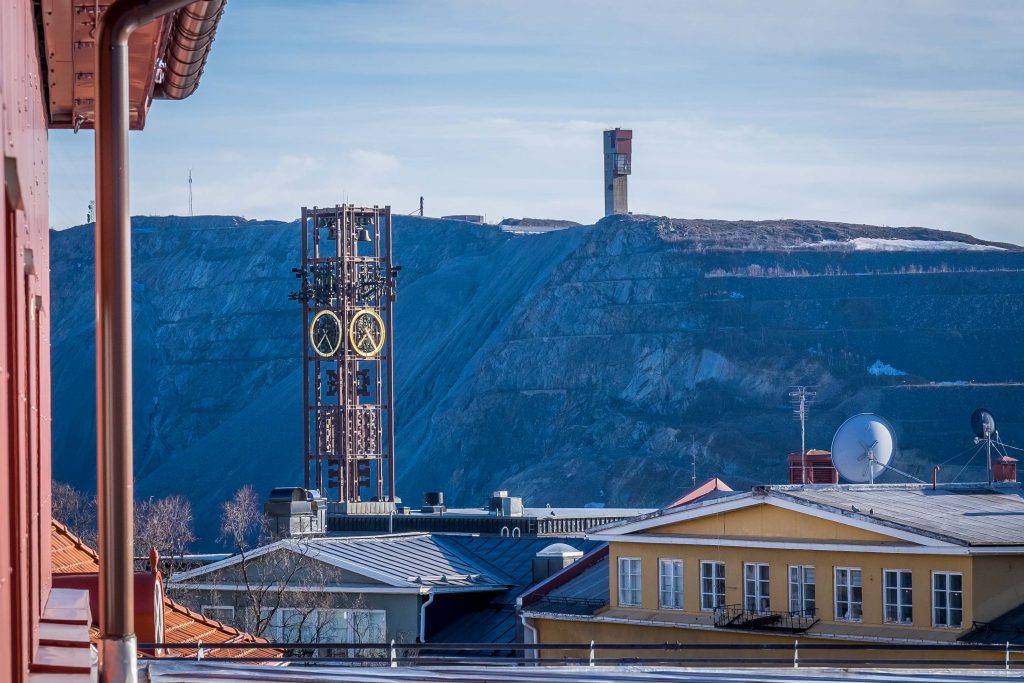 The blogpost by Anette Hallin on August 30 was – besides a really good read – very timely. On the most recent trip to Kiruna (August 23-25), the importance of enrolling senses and sensibilities beyond the analytical part of the brain proved itself again. This time, Johan traveled alone so in his words:

When in Kiruna, I usually don’t wake up when they blast at night, but this time it was different. I don’t know why; it might have been because of where they blasted that night. It was very evident, feeling it in my chest before hearing it; a powerful vibration, like a dark voice coming through a bass amplifier, hit me internally [in a sense Johan was experiencing what a previous interviewee expressed when working underground, but in that case it was the sound of the mountain at 1365 meters, as Tommy tried to imitate with the help of an electric guitar in the song The Sound]. I didn’t think much about it, however (the photo for this blog post is taking from my hotel room). Next day, during the day program with Tornedalsteatern, two of the documentaries shown, one about Kiruna by Liselotte Wajstedt and one about Malmberget, frequently came back to how it is to live with the blasting and the mountain sagging. Parents and relatives being worried about their places of living and of loved ones working underground [Johan has written a lyrics on this theme, The worrying song, on the second album]; those working in the mine shrugging their shoulders, ‘what can we do, the ore has to be extracted’. We’ve frequently heard such stories during our project and, sure, we think we understand what they mean. Being underground previously, both Tommy and I were all ears for saggings, but haven’t heard anything so far. We’ve been there, but not yet experienced the mountain from this perspective. And sure, we’ve also been awake, and awaken, when they’ve blasted before, but somehow the blasting is easier to cope with as it is a planned, human activity. It simply feels and seems more rational. At that particular time (01.17), a button is pushed, boom, than the vibrations. I get it. It’s another story when the mountain sags, unplanned, unexpectedly. For me, that’s more spooky.

During the last day in Kiruna, I had an interview at Scandic hotel Ferrum with a person who has grown up in Kiruna and who has worked both inside and outside the gates. Just before 10AM, the whole hotel shakes. I looked at him, searching for a confirmation that this wasn’t too serious, right? No such look from him. After all, my first instinct was like ‘let’s go’ (to where I don’t know and nobody else in the hotel moved). With a serious but still rather cool face he eventually looked at me: “This wasn’t good.” That didn’t calm me down, but he then rationalized it: “You know, they might not even have heard this underground.” He added that it depends on where the sagging occurred. On with the interview, that is. I felt like tying my shoes, just in case… The day after, LKAB communicated this (my translation below):

“En seismisk händelse inträffade i Kiruna klockan 09.59 på torsdag 25 augusti. Händelsen lokaliserades till 925 meters nivå i hängväggen intill malmkroppen och hade en lokal magnitud på 2,2. Högsta uppmätta vibration i samhället var 2 mm per sekund på Bolagshotellets annex. Inga skador är rapporterade, men många i samhället kände av händelsen.” “A seismic activity occurred in Kiruna at 09.59 on Thursday, August 25. The activity was localized to 925 meters below in the hanging wall close to the ore body and had a local magnitude of 2,2. The highest recorded vibration in the community was 2 mm per second at Bolagshotellet annex. No damages have been reported, but many in the community felt the activity.”

This is of course not the only seismic activity recorded and felt recently. For people in Kiruna (and in Malmberget) this is more routine than exceptions. Click here for LKAB’s reports on seismic activities.

I then remembered the day before, walking through town, overhearing four locals that were enjoying the sun, talking to each other about the devastating earthquake southeast of Perugia in Italy. Small observations. They think about it.