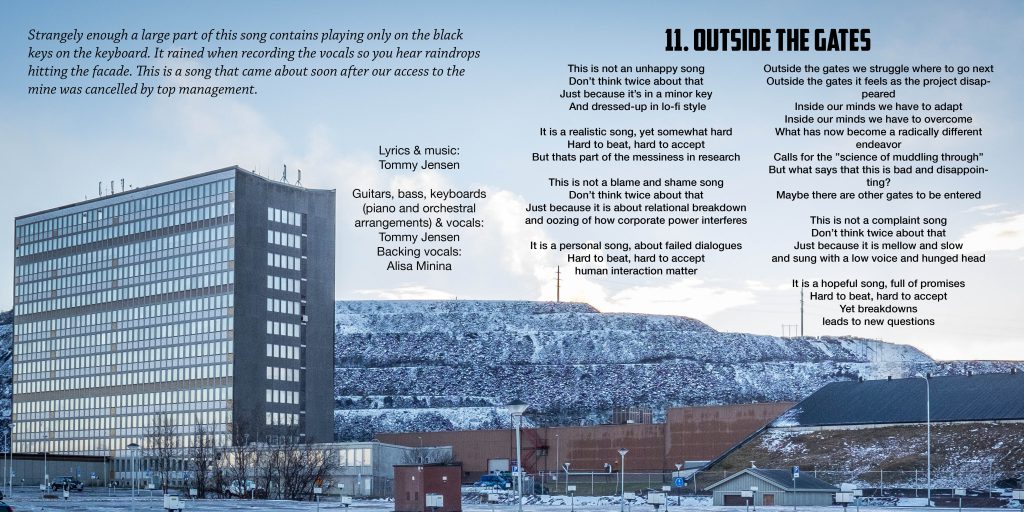 Whether in the Region of Bougainville (Papau New Guinea) or Malmfälten (Sweden), the economic, social and environmental impacts of mining are significant and tend to provoke strong reactions from a vast variety of actors. Contested business, contested areas, means navigating multifaceted, complex and value-laden relations. This requires engaged and sensitive social scientists that continuously reflect on their own values and interests. This is a discussion that we have covered before on this blog, but we just got a very good reason to revisit it.

Stuart Kirsch, anthropologist at the University of Michigan, who previously have contributed to this blog, have written yet another thought-provoking book, this time more focused on the research approach he has practiced and developed when studying mining conflicts, Engaged anthropology: politics beyond the text. ‘Engaged anthropology’, it triggers our thoughts on an ‘engaged organization studies’. Not sure we’ve heard of such a term, have you? Maybe ‘reflexivity’ comes close, but it is, we think, more of an apolitical character; as if reflexivity would be possible from a neutral position.

Engaged, we believe that without being engaged we would never get interesting empirical material, but Stuart takes this more than one step further. So, if you get nervous when scientific ideals such as objectivity, neutrality, distance etc. are challenged, do not read further.

To give you a teaser and an idea of what Stuart’s approach is all about, here are some quotes from the introductory chapter:

As might be guessed, Stuart’s engaged anthropological research on mining, particularly in Papau New Guinea, has also been the target of critique, such as: being dogmatic, not robust enough, lacking symmetry between actors, not levelling stakeholders on equal footing, more activism than science etc. We can recognise our own engagement in Organizing rocks in some of this critique and we have to some extent struggled with it since the start. How do our values, interests, methods, readings, influence our ‘science-in-action’ in the Kiruna and McArthur mines? Are we neglecting some actors, perspectives, statements, signs? Are we shying away from certain topics because we are scared to put our chins out? Are we always ready to question ourselves, ready to change? We’ve previously written about the “risk of being co-opted or of developing rather dogmatic stances” and that we should “constantly be in doubt, a bit skeptical, and to have a sensitive mode”, which, we admit, might come across as rather cryptic formulations, but yes, they matter, to us.

We’ve also met the oppressed, heard the voice and read the words of the privileged, and, yes, we’re not immune to these influences. It is impossible to be impartial, to stand on neutral ground. So, in this sense, why not claim that active engagement (through dialogues, in our case) is required?

In the type of critique launched against Stuart’s work, we do share the call for broad, inclusive engagements, in terms of whose voices are heard, and the need for phenomenon-driven (less a priori-settled) research strategies. If the phenomenon is complex and multifaceted so must also our methods and conceptual frameworks be. Paraphrasing John Law’s rather brutal take on this: it takes mess to capture mess. A priori openness, a sort of curiosity of what might be found when talking openly, with genuine interest and respect, with a diverse set of people, in different settings, is a research strategy that we’ve practiced in Organizing rocks.

But, we don’t agree with most of the critique launched against Stuart’s work. Although useful to be aware of it, it does suffer from one major deficit: it lacks power and power relations. For us, these issues were upfront, input-value in our project. Entering a large-scale mining arena, such as the one in Kiruna, we know that power relations are asymmetrical and we cannot be naive about this. A priori, whose voices are heard, who matters? Who are marginalized, excluded, silenced? In our case, the first answer on people’s lips is the company, LKAB. In a way, the old saying is true: ‘When LKAB has a cold, society sneezes’. This is an early-warning signal that there are power asymmetries and, hence, no equal footing, in Kiruna. How did we deal with this?

Organizing rocks is a basic research project. One way that we handled power asymmetries while also studying them was to remain in control of our research aims and questions; to not, for example, compromise on the questions we ask. This is our area of control, our responsibility, and one way to treat them all on equal footing. It was also one reason why the company (e.g. top management) did not want to meet us. Top management did not want to participate on any equal footing. Meeting, for example, local unions or local indigenous people, they never tried to control the questions we were asking. They agreed to meet, to converse, so for them we could have empathy, we listened, we tried to understand, and tried to come out as slightly different actors following our meetings. Luckily for a study striving for a ‘multi’ approach, the actor refusing to meet us (e.g. top management) ‘speaks’ in other ways (media, web, social media, reports etc.) so we have at least some idea on where they stand and why, but as we understood it, they felt that we were engaged in the wrong issues, and engaging these in the wrong way. As was told to us: we are not useful to LKAB. So, as also written about on this blog before, we were banned by top management (in Luleå and in Stockholm) from coming inside the gates to the mine in Kiruna (local workers and managers seemed to think that what we were asking were relevant and important).

As Stuart also has reported, when one door closes, others are opened. Ironically, when top management said no, closed the entry gates to the mine for us, actors who would not talk to us previously now decided to do so – but again, without trying to control us.

While our access to people inside the gates in Kiruna was restrained in the end, this was not the case with Cameco at McArthur in Canada, which immediately raised the risk of a wrong type of engagement, of us ‘cozying up to the corporation (see Emily Eaton’s blogpost). Many times, it felt like balancing on a knife’s edge. It’s never easy, for us at least. You might be a judge of how we’ve navigated, comparing the Kiruna case with the Canadian case (based on our blogposts on McArthur; there’s the scientific article on the case, but we’ve just submitted it, again, see the logbook). For now, it helps reading about engaged anthropology!

What if all scholars were as articulated on positioning and engagement as Stuart (what if we were?)? It would for sure enhance derivation and honesty-in-field and in-text, make it easier to evaluate whether or not to trust the descriptions and their arguments, to be able to judge how they have positioned themselves when analyzing. So, we try to consider research that hides behind screens of neutrality, objectivity and impartiality as highly problematic; those who most likely are very engaged but only implicitly so (of course we’re not saying that any subjective stance are okey; again, we’ve to avoid dogmatism and fight analyses that ‘stand on’ shaky ground). But, mirror mirror on the wall, who are you researching for, and why? What about those who write about ‘equal footing’ or assume that capitalist expansion as a ‘natural good’, and their research? We know dozens of skilled Swedish researchers who in their research engage fully in making mining more efficient, productive and profitable, but without any reflections whatsoever about the politics of their engagement. It is more or less taken for granted; perceived as a natural, neutral position; from one perspective thus conflating a currently dominant perspective with a right. Would it not be fair to ask for a similar transparency as in Stuart’s case?