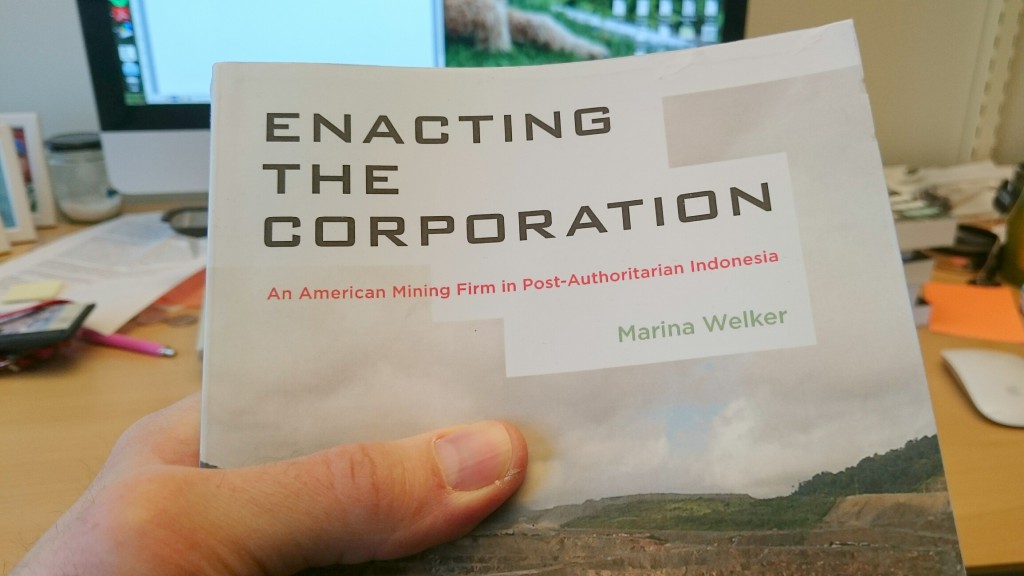 Although in intervals, we read. We prefer to read books, preferably good books. Not all good books happen to be relevant to Organizing rocks, though, but reading Marina Welker’s book reminded us again that we should start sharing good readings on our blog (a review of Stuart Kirsch’s “Mining capitalism” is on its way), hopefully inspiring others to pick up these books!

Welker focuses on the American company Newmont Mining, at its headquarters in Denver, USA, and at its Batu Hijau Copper and Gold mine in Sumbawa, Indonesia, following social relations and material practices tied to the company’s “ameliorative disciplines” (as CSR and environment). She sets out to “show that people enact corporations in multiple ways, and that these enactments involve struggles over the boundaries, interests, and responsibilities of the corporation” (p 1). We read it as a resistance to static, simplistic and reductionist accounts of corporations’ role and responsibilities. Both radical corporate critics and neoliberals tend to reduce the idea of the corporation to a homo economicus profit machine, but although an idea with some currency on a higher level, in practice, it is very difficult to identify such a pure enactment of the corporation.

For us, as rather eclectic organizational scholars inspired by Erving Goffman, Zygmunt Bauman, John Law, Annemarie Mol (great to see her in Welker’s book), Richard Rorty, Barbara Czarniawska, and many, many others, this is not a novel idea, but that doesn’t mean that our field celebrates complexity, ‘contextuality’, materiality and contradictions! On the contrary, we see Welker’s study as more important than ever given the complexity of the role and responsibilities of the corporation in our ambivalent times. Tracing the corporation across time and space, from Denver to Sumbawa, from the archives to ‘here and now’, through social relations and material practices, Welker shows that “enactments are provisional, context-specific, and variously successful and resonant” (p 6). Albeit with a different phenomena in focus – the labor process – we are trying to do something similar with Organizing rocks.

Particularly interesting is Welker’s discussion on how two main competing and co-existing enactments of the corporation seem to be at work: the patronage model and the sustainable development model. The patronage model is where “the company acts as a surrogate state providing jobs, tangible welfare, and infrastructure to local communities” (p 69), as sitting on a “pot of money”, in our Swedish case a model very much practiced and expected by local people in Kiruna of the owner of the Kiruna mine, LKAB. The sustainable development model is to some extent neoliberal “as it embraces programs that cost less than those of the patronage model and transfers responsibility for community welfare from the company to community members themselves or the state” (p 71), also as a kind of help to self-help, of developing a set of entrepreneurial skills (the role of the state, however, might differ here from the neoliberal model). This model is recognizable in how top management at LKAB enacts the role and responsibility of the corporation, particularly in its treatment of suppliers and in its role in the move of central parts of Kiruna, where they to some extent try to move away from the patronage model.

Echoing what we recognize in our project then is that: “From a cosmopolitan CSR perspective, sustainability occupied the moral high ground; but in the local moral economy, a patronage approach formed a political and practical necessity” (p 102). A bit harshly but very vividly put by a Newmont manager advocating more of a sustainable development model: “After the spaceship landed, everyone wanted to get on it. What they didn’t understand was that it was going to leave and wouldn’t be taking them along.” (p 104) LKAB and the Kiruna mine have a longer history (a marriage) with the town of Kiruna, but dealing with finite resources, there’ll be a day when the spaceship leaves Spaceland.

Reading the book we get several other associations and without spoiling your own reading there are excellent stuff on social distance (leaving HQ in Denver vs. leaving the Newmont’s Townsite in Sumbawa), the diffusion of corporate and capitalistic values (from HQ in Denver, in local ‘entrepreneurial trainings’ in Sumbawa), corporate strategy of transparency (where being transparent backfired on the company), supplier relations (hiring locals, unskilled vs skilled jobs, making the contracting process more competitive and suppliers more ‘individualized’), the complexities of alliances of interest (between company representatives and local community and NGOs), how local communities are affected by a mine (pollution, a gated Townsite), and the complex role of the state (as regulator, business partner, owner, responsible for building infrastructure etc.). The book can also be read with an interest in qualitative and participatory research methodology.

Regarding Welker’s empirical material, she has tremendous access to the mining company, spending six months at Newmont HQ and one and a half year in Sumbawa, inside and outside the gates (this issue is something that has been debated here on the Organizing rocks blog). Welker states that she has “independent funding for my research and no contractual restrictions on what I might publish” (p 7). That sounds almost too good to be true when having access to ‘the corporate inside’, but reading the book, we don’t get the feeling that Welker has had to compromise on her intellectual integrity. She is careful in her account when it comes to individuals, which resonates well with the research ethics guidelines we also follow. Later in the book, however, she states: “I believe they [the managers letting her in] saw the potential for an experiment in enacting Newmont as a transparent corporation” (p 34). So, there might be something here (see also Emily Eaton’s blogpost from February 8, On Cozying up to corporations, and Stuart Kirsch’s response on March 24, Mining capitalism and corporate ethnography), but then again, there’ll always be interests and they always have to be handled. Welker reflects explicitly on this and also seems to have sold the idea of ‘no contractual restrictions’ to Newmont and perhaps other mining companies can pick up on it. We’re still struggling with this issue in the Organizing rocks project. It would be interesting to learn how Newmont’s executives have received this book.

In sum, Welker’s book is s a very impressive and enjoyable read. She is reflexive considering her epistemology, navigates among literary giants and recent research, writes in an accessible style (she’s very much in the text, we love it!), reveals an impressive empirical material, and, most important of all, has an important message about scholars embracing rather than reducing the complexities of how a corporation is enacted and the consequences of this for its role and responsibilities in society. We’re glad she focused on mining!

A final reflection: “If the corporation is multiple, then our analytics must be multiple as well” (p 218), yes, but we read this in a research monograph and although it proves to be a very good injection to our own thinking, what about “multiple” in terms of how research is communicated? When do we get to see the “Enacting the corporation” movie and hear the song?