On October 20-21, we participated at the annual conference for business studies in Sweden, FEKIS, at Uppsala University.

During the day, our project was one out of three examples of scholars in business studies researching societies; a session built on the idea of research challenging the predominant focus on formal organizations. Besides Organizing rocks, there were Caroline Wigren’s study of Gnosjö and Mikael Holmqvist’s study of Djursholm. Our project, however, does not aim at studying Kiruna as such (although it is hard to avoid), but definitely aimed at challenging a lot of formal organizational boundaries, given that an understanding of the labour process cannot be confined to such boundaries. The crowd was large and although difficult to say, interest also seemed to be high.

Some of the questions asked during the session were: how do you know you have the theories needed, how do you present yourself in the field, why did LKAB stop you from going inside the gates etc.

After the sessions ended and people were mingling before dinner, we played live outside the lecture halls, in total four songs from our upcoming Swedish album on the Kiruna mine. The songs were: Regn över berget, Den svenska malmen, Stänger alla kranar and Vackert. This was the first time we played together (photo by Mikael Holmqvist): 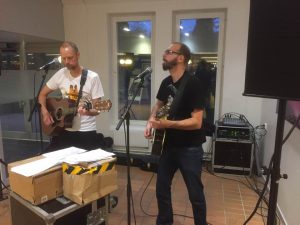 2 replies on “At a conference”

We didn’t really hear ourselves, so as far as we know, we sounded great!