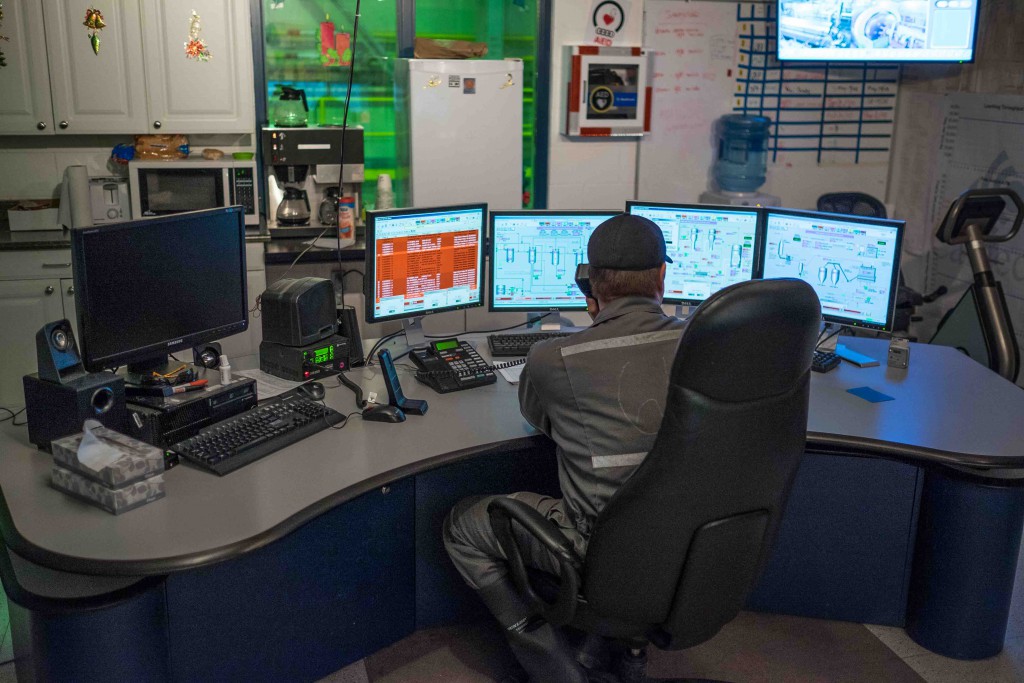 The presence (past and present) of indigenous people in northern Saskatchewan significantly influences the labour process of MCA. It’s quite a contrast to Kiruna where the Sami people have a more peripheral, even marginalized position.

According to a recent report from the government of Saskatchewan, the mining industry in northern Saskatchewan employs about 3400 persons of which half are RSN. It also says that 43% of all mine workers are indigenous. Behind this development lies strong legal rights awarded to indigenous people in Canada and what seems to be an explicit political will in Saskatchewan to put pressure on companies to build capacity in the north. We don’t see this in Kiruna, in the county of Norrbotten nor in Sweden in general, which might explain why the Sami people do not play a significant role in the labour process in the Kirunamine (whether this would be a good or a bad thing is another issue).

AREVA and Cameco, running the uranium mines and mills in the north, have to sign two partnership agreements with the Province of Saskatchewan, one human resource development agreement and one mine surface lease agreement, both directed at capacity building in the north (hiring RSN, developing their business opportunities, help provide education/training opportunities etc.). The “surface lease agreements for northern uranium mining projects require companies to participate in a community vitality monitoring program” (2013: 3, the Community Vitality Monitoring Partnership Program, CVMPP). Cameco recommended me to read the reports by the CVMPP and they provide useful information with which to compare my impressions from visiting MCA.

Zooming in on the reports, one report from 2013 targets the socio-economic impacts of uranium mining in northern Saskatchewan. On site, I heard several times that the mine paid well (just as in Kiruna) and in the report it says that “The uranium mining industry provides some of the highest-salaried positions in northern Saskatchewan” (2013: 7), but also that “the average household income and median household income for the population as a whole, when adjusted for inflation, actually decreased between 1981 and 2006. The gap between the average and median household income, an indicator of income inequality, also steadily increased” (2013: 8). The uranium companies are therefore called upon to provide more opportunities for Aboriginal/northern workers in supervisory positions and professional jobs, which reflect what seem to be key challenges in the north. Under the heading “employment” the report states that the number of RSN:

“employed directly in the uranium mining industry increased fourfold from 201 in 1981 to 832 in 2011. The proportion of the direct workforce (i.e., those workers hired directly by the mining companies) made up of RSNs appears to have reached a plateau during the last decade (e.g., about 46% in 2011). When considering both the direct workforce and the workforce hired by long-term contractors (e.g., security services, food services), the proportion of RSNs rose to 47% (2011). This fell short of the 67% target rate set by the Joint Panel in the 1990s, although each of the mining companies continuned to try to find innovative ways to address this gap.” (2013: 7; emphasis added)

One reason for this ‘plateauing’ is the lack of education among RSN: “While the number of northerners 15 years and older with at least a high school certificate or equivalent has increased substantially from 1976 to 2006, education attainment rates in northern Saskatchewan have not reached parity with provincial rates” (2013: 6). Even larger communities in the north usually cannot provide education beyond grade twelve. Basically all aboriginal people I talked to on site at MCA and Key Lake had no higher education, but many had to some extent worked their way up the hierarchy through Cameco’s own training and through work experience. This often meant operating more advanced machines underground in the MCA mine or achieving the highest level of control room operator at the Key Lake mill. In the report, uranium companies are called upon to provide bridging programs between high schools and colleges/universities, but also to invest in early childhood development.

The same year, 2013, a report on RSN in supervisory positions in the uranium industry is published. Although clearly written “from an industry perspective” (2013: 31), it addresses what seems to be an ‘indigenous glass ceiling’: “From 1992 to 2012, the number of RSNs in supervisory postions increased from 18 to 71 or an increase of 394%. Despite this progressive trend, the ration of RSN in supervisory positions versus all supervisory positions continue to remain constant and below 26,4% (Cameco, 2013).” (2013: 8) Again, it is stated that RSN “lack the needed formal education and skills” and that the “uranium mining industry is also becoming far more advanced and technical, requiring specialized training in various occupations” (2013: 26). Other aspects of why there is a lack of RSN in supervisory positions are “that when RSNs do move up in their position it is a ‘sink or swim’ opportunity”, that “where unions are active, they can also be viewed as a factor whether RSNs have opportunities to gain experience” (not all mine sites are unionized), and that “Cultural misinterpretations and misunderstandings continue to occur at the mine sites” (2013: 27).

Some of these problems were addressed already in a 2006 report from the CVMPP. Interesting information is put in the appendix of the report, however, due to the authors not regarding it as central to the specific report and because these problems were not central to the findings of the report. Under the heading “Lack of Northerners”, it is stated that: “Some respondents were unhappy with the proportion of Northerners working at the mines, which they felt was low” (2006: 56). Cultural tensions are also mentioned, but under the heading of “Racism”, where it says that: “Many mine workers, their spouses and community members said that racism was a problem at the mine site. These respondents were discouraged by the lack of Northerners assigned to senior positions” (2006: 56).

In the 2006 report, a “Community Bias” is also addressed: “Some respondents felt that the company was biased in favour of certain regions/communities. In addition, some respondents felt that individual communities were treated differently by the company, either because one community was more vocal or because of their status as a reserve community.” (2006: 56-57) In the socio-economic report, however, this is linked to education and the access to skilled labour: “Some communities has a greater percentage of their workforce employed in the industry than other communities despite being a substantially larger distance away, which tends to relate to the availability of skilled labour in a given location” (2013: 14).

A lot of the responsibility to deal with how to increase the number of aboriginals in supervisory positions is again put on the companies: “based on the long term nature of the uranium industry, it is encouraged that the uranium mining industry partner and invest (where appropriate) in early childhood development and primary education” (2013: 32) and that companies “develop and implement a RSN specific (potential consideration of northern and First Nations culture and socio-economics) leadership program” (2013: 33).

It is as if all roads lead to rather vague recommendations that the companies should use their power to change the labour process to benefit RSN more. To my knowledge, Cameco is doing a lot and perhaps it should do even more given the power asymmetries between company and communities, but this strong corporate focus also shadows the role and responsibilities of other actors.